Transforming Love for an Enemy

I am Krishnappa. I was born in a Scheduled caste family in Karahalli. Our native group is called Adi kannada. We have 6 million people in Karnataka state.

In 1990, pastor John Madhan Mohan came to work among our people. We did not like Christian missionaries working among us and converting us because the government has allotted so many favours for the hindu Scheduled caste people but if we convert to any other religion we will lose those allocations. Even Moslems are in good number and they get favours by uniting and finghting for favours. Also, good funds are coming to Muslims and they have militant groups also. Muslims settle scores with other people even for petty issues, they say that the opposite party
told something about their Religion or leader.

Since Christians are vulnerable, we do not encourage evangelists among us. So we have some youths united for this cause.

One year later he got a buffalo. At night I came and stole it away. I wanted to sell the buffalo in the beef market which is 10 kilometers away. But after going 4 kilometer I was caught by some villagers who traced pastor John Mohan and gave the buffalo back to him. I gave up my war against him because I lost all the battles.

In the mean time, a church was formed in Karahalli and the work developed. I lost my peace of mind. I became an alcoholic and began to beat my wife. I developed an illicit relationship with a garment factory worker and forgot my wife and children. One afternoon my wife Retnamma decided to commit suicide and was on her way when Pastor John Mohan’s wife Thankamma met my wife near the well and on the same day my wife decided to live for Jesus thereafter. 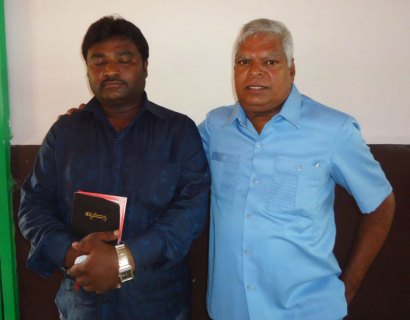 I also repented afterwards and confessed my crimes to Pastor John Mohan. He told me that man is a sinner naturally. You cannot do good unless you receive Jesus and are born again. I confessed my sins to Jesus and received Him as my Lord and Savior. I bought a small bus (16 seats) through bank loan and found a God-fearing life.

When pastor John Madhan Mohan shifted to Nanjangud town, he trained me and asked me to continue the work of Karahalli. My wife is still living and she is with me. We have three children, Grace, Light and Manoj Christopher.

My story is about a dedicated life and how God changes lives.