Greetings to all the leadership, board members, friend and partners of Messiah Missions, without which this work could not continue.

By the grace of God we had an outstation evangelism work in a place called Anjipura. The branch churches and mission stations of Nanjangud Messiah Mission Church Nanjangud town is situated amidst many villages and hamlets. The population in the villages is from 200 to 2000. It is essential to visit the villages because Karnataka lives in villages.

The main occupation of the villagers is agriculture. Much of the fertile lands belong to Landlords and poor villagers find it difficult to irrigate the fields. So only one crop is yield and the rest of the time the fields find sleep. This time the villagers will breed sheep and dairying also is a good side income generation program. From Nanjangud town it is not easy to visit these villages every time. So MESSIAH MISSION has put some missionary evangelists in these areas.

All these are some of the outstations near Nanjangud town.

There were eight adults and three children in the team. Many more wanted to come but our old vehicle could not accommodate more. Since here there is much opposition in this village not much tracts and booklets were given free except for a handful of small books given free. We found time in contacting people and personal evangelism. We found time for a prayer meeting. Brother John Roy was driving the car and he was also leading the worship service. Sister Hephzibah has been useful in singing a couple of songs in the missionary’s house.

Brother Anjipura Sidharaju, he has a long testimony. He had a bad nose. Blood was always coming out of his nose. He had high blood pressure. After consulting many doctors and visiting many hospitals he came to our Messiah Mission Headquarters In Nanjangud and requested to pray for him. Our missionaries told him Jesus Christ is only one god living and true God which came to save sinners. The death of Jesus Christ on the cross is a propitiation for the sin, sickness and eternal judgment. So whosoever believeth him should not perish but to have everlasting life. We prayed and he was healed and works in this small village. His wife is Pushpa. His son Suhas and daughter Sukitha sowed much hospitality.

Brother Sidharaju’s family arranged nice lunch delicious also in their house. A Tamil family on the way showed us much love and gave us plenty of sugarcane milk to drink. May god bless the village and these families. 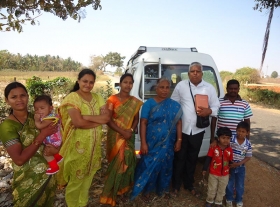 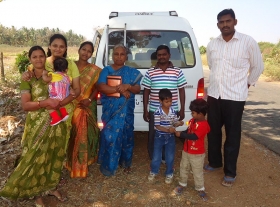 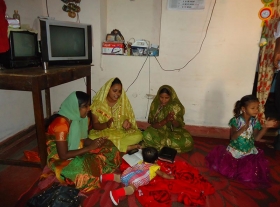 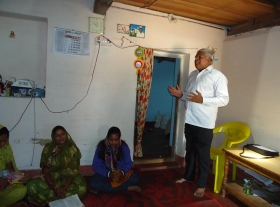 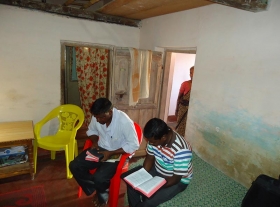 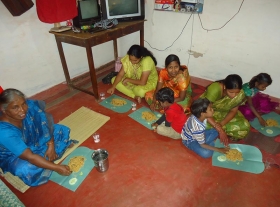 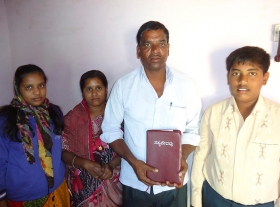 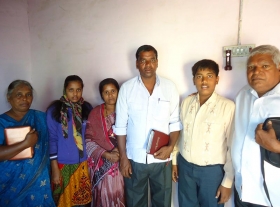 The Director supported a large amount to buy a portable speaker system which will be used during outstation evangelism work and open air preaching. We gave orders in the shop and the owner which is also a Christian arranged for us to get a speaker system which may be used outside also because it has built in Battery system. The details of the system I send as scanned from the Originals. I specially want to thank our International director for providing us this Mic-amplifier-speaker-battery-music System all in one.

Since Messiah Mission is a Compassion outreach to the destitute ministry and we are working among the widows and children for their upliftment and turning towards God and also to wipe away tears from their eyes we made a plague also for that. Since the Lord has given us 35 cents of land (30 acres) for this purpose we can have some permanent measures to see that we reach with compassion outreach to the destitute.

Pastor Satish Chandra is doing a marvelous ministry among the Chola Naick tribes in the Wayanadu district of Kerala stat 120, kilometers from Nanjangud town. Pastor Suresh which was also a co-worker with him has moved to Meenangadi-chulliyode for starting a ministry there. All his family members are still Hindus and no body of them is converted so far. So he wants to be a witness in that area.

His home village is 10 kilometers away from this area. Pastor K M Paily has moved to Kalpetta because he received considerable opposition from the communal Party BJP in Kadakola where because of him 3 villages could know the Savior. Brother Biman from west Bengal reports that 12 people received baptism this month. We are praying for a Holy Ghost revival in India which will sweep the Nations.

Our Lord is such a faithful God and I personally confess that I am blessed by him all through my Life. Last week, all of us in the church worked so hard to see our new building set up in a mighty way. God met all our needs and thanks to all the faithful donors of the Messiah Missions and the Board members. On 25th Dec, we celebrated Christmas in that new building and dedicated it to the Glory of God. We all gathered there as a church and prayed for the perfect use of the new building in a godly manner.

A great need arose after we conducted a public meeting in an abandoned cinema theater on December 7th last month. Our good Lord makes no mistakes. That was the time we had to vacate the rented building in which we conducted church services and prayers. It was also very useful as a National Headquarters for Messiah Missions in India. 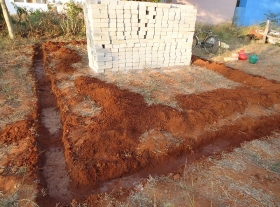 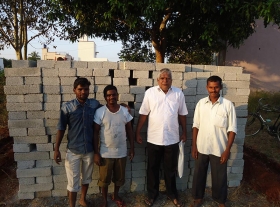 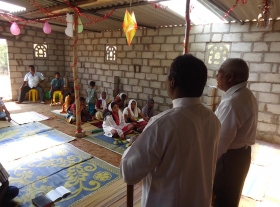 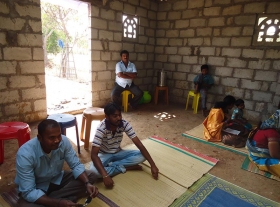 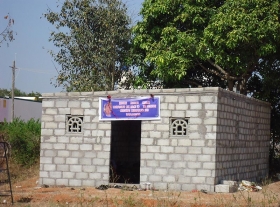 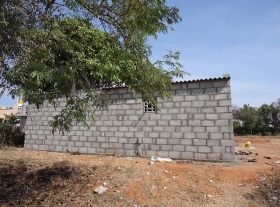 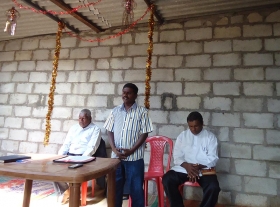 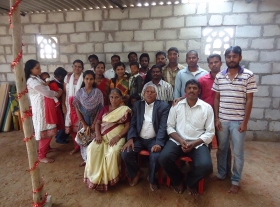 We got the small piece of land 20 feet x 35 feet and began construction. We feel proud to tell our USA donors and well-wishers of MESSIAH MISSION INTERNATIONAL are with us. We constructed 18 feet x 30 feet main hall and roofed it with steel pipes holding asbestos sheets. The floor was decorated with cement and baby jelly and we put an iron door standing on iron frames for the building. We need to take electricity service connection to the building because we are conducting Bible studies there every Tuesday night. Presently we are using candles. At the back we have 5 feet into 15 feet work area in which we propose to build a toilet and a small kitchen.

Since people are coming from far away villages we need to provide midday meal for them. Sufficient open space in front of the building provides room for special meetings.

In India, women population outnumber men. The women in rural India are mostly uneducated. They are the vulnerable sex in some part of India. Dowry problem, sickness and care for the children. Our women evangelists try to reach these women with gospel of Christ. They used to pray for the sick and encourage the women in their affliction In the picture two of our women evangelists visit the Pediatrics ward of a hospital. Some of the hospitals they visit are: 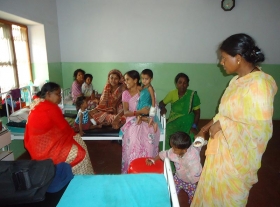 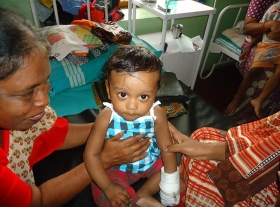 My wife Thankamma sends all friend and partners greetings. My daughter Hephziba and her husband are present here. They convey their greetings to those of Messiah Missions International.

Thank you for the continued cooperation from the director, board and dependable donors who make this work possible. The Lord will shine His face upon you and bless you as you support and lead this needed ministry here in India and Pakistan and other parts of the world.

May Peace and Grace continue. 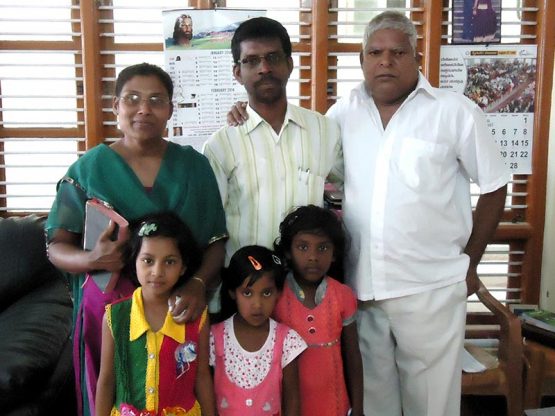 I was born in Karnataka, Chickamagalur district. My father Joseph was a Christian in name. He married a Hindu woman and had three children. I am the eldest. We were in Hindu civilization and we were in very problematic situation due to no work for my father. My mother went to Communist meetings they use to give something by which we were taking a square meal daily.

In those days, that means 1988, Pastor Mahan Mohan and family were living in our village called NR Pura. This is a taluk headquarters but very backward area. My father went to his house on a fine Sunday morning which changed our course of life. There was a Christian prayer meeting on Sunday morning my father attended the prayer. God’s spirit spoke to him regarding his misery came because he left God and went following idols.
My father came to house and told my mother that he would live or die following Jesus. My mother also told she would follow her husband. Pastor Mohan was invited to our house. He preached Christ is the answer for all the questions of life. Whoever believeth Him will not perish but would have everlasting life. If your soul lives in good condition you will be good in your health and prosperity.

My father, my mother took water baptism. I was fourteen years that time. My younger sisters were 12 and 10 . We three children began to attend Sunday School. When the church had 100 members and more Pastor Mohan left that place and went to pioneer areas. In the mean time I grew; I knew Jesus is the only Living and True god and the preaching of the gospel is the will of God for a believer.

So after my education I took water baptism [Matthew 28:18-20] and [Mark 16:16] I went to K P Yohannnan’s Bible college which was in Mangalore. After three years I came to pastor Mohan in 2008 and started ministry in Begur which is 22 kilo meters from Nanjangud town. He was supporting my house rent, living allowance and travelling expenses through Messiah Missions. Thus I came to know about Messiah missions International.

Then one day I thought about North India and a burden for Himachal Pradesh came to my heart because so many children are thrown away there in Ganges River because of rituals. And Anti-conversion bill had been passed there against preaching of the Gospel. Pastor Mohan was supporting me by his tithes only. He was teaching me faith work. But I had good prayer support from them. Somebody gave me a vant house to live in. Nearby people gave me food and clothes. Some opposition was there but no body beat me. I did not give baptism for many people.

Here in Himachal Pradesh we cannot give baptism. You have to get permission from the District Police superintendent. We use to skip this by going away from Himachal Pradesh and conduct the baptism in Punjab nearby state. God did prove his gospel and many people came for prayer. Now a good number of believers turn up and a prayer hall became immediate need. I fasted and prayed for a couple of weeks and decided to meet Pastor Mohan.

All the way I came to meet Pastor and he encouraged me to go forward. Since the financial position is not fat presently I will not have a church at once but I will be helped continually by the Messiah Missions.

My wife also a believer and prayer warrior and I have three female children. One of the children had been taken from a road side while that child was one month old. Anna‘s story had been published previously. Her mother was raped continuously and she gave birth to this child and threw her away way side. We took her and are looking after her very affectionately.

Pastor Madhan Mohan gave a very good amount for my travelling expenses and ministry needs. I am going back to Himachal Pradesh and I will be ever grateful to Messiah Missions. Please pray for me and support continually through Messiah Missions.