Finding the Balance in World Missions 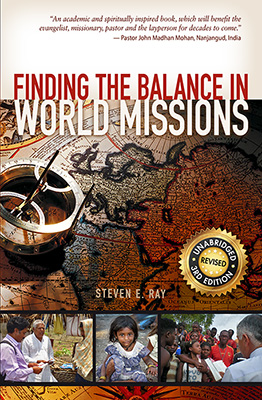 “An academic and spiritually inspired book, which will benefit the evangelist, missionary, pastor and the layperson for decades to come.” — Pastor John Madhan Mohan, Nanjangud, India.

The need for clarity regarding Christian missions amidst the varied traditional and modern methods cannot be overemphasized. In addition, the inherent challenge of understanding and managing local and indigenous missions combined with postmodern thought can conflict with traditional biblical standards.

Translated into various languages, this book is being used as a field guide by those active in missions. The content is not intended to be an exhaustive resource, but rather a manual written as a general overview for easy reference. Its readership may include pastors, missionaries and evangelists along with any Christian whose heart is touched by God’s call into missionary work.

The author reviews the historical methods in evangelism, along with various modern and historical problems found in missions. The reader is shown the problematic departure from biblical evangelism inherent with postmodern models, along with the challenge of syncretism and the effects of the Social Gospel.

“Behold, I say unto you, Lift up your eyes, and look on the fields; for they are white already to harvest” John 4:35b.

Please Note: Messiah Missions offers this book for FREE to anyone who wishes to submit their mailing address in the contact form. We can only mail in continental United States. You will not get additional mailings as a result. Any freewill offerings through the Paypal link at the foot of this page are appreciated!

“Finding the Balance in World Missions” intends to share God’s revelation about the biblical model of missions as presented in Scripture. The material is segmented in various parts. The content first studies the modern, then historical methods of evangelism, which is the main component of biblical missions. Chapter six begins looking at the current condition of world spirituality and the Church, moving into chapter eleven which focuses more on the Christian’s personal involvement with missions. The last few chapters discuss the indigenous church, the missionary, the native pastor and the supporting organization.

Modern missions including the role of evangelism is far more challenging than we might immediately perceive. Most missiologies (studies of missions) have been written from a mono-cultural perspective where the United States was assumed to be center stage. This is primarily due to the lack of global perspective, something this book seeks to remedy. Because of the rise of postmodernism in the Church, ongoing redefinitions modify the purpose of missions, requiring us to carefully examine the revised methods against biblical revelation.

There are multiple trends that have affected missions, namely in the West, which has resulted in some confusion and gradual departure from sound missiology. Initially, there is a general malaise and regression of traditional Christianity in what used to be sending nations. Additionally, the West has been slow to grasp the full missiological implications of the simultaneous emergence of the post-Christian and post-western Christianity.

As the biblical traditions which shaped the Church break down, one of the predominant changes in missions is the humanitarian social manifesto, a mindset that has replaced biblical evangelism with the revived “Social Gospel” movement. What has spawned is the simultaneous deconstruction of post-denominational identities along with the emergence of new denominations that redefine traditional biblical standards. This sometimes results in institutional communities focused on social works over the necessity of foundational discipleship.

We want the reader to realize that the work of missions is primarily God’s Triune work (Missio Dei) to guide and empower, not ours. Evangelism and missions is God’s redemptive, historical initiative on behalf of His creation. Missiology must be articulated from a theological and theocentric framework found in Scripture. Social science and business-world insights are helpful, but the Bible will always be the guidebook, the final revelation of God’s divine purposes.

Father God as Creator is the sender as Lord of the harvest; the incarnate Son Jesus Christ is the whole embodiment of a missionary going into the world; and the Holy Spirit is the divine, empowering presence for all of mission’s work. Anything more or anything less can quickly result in a departure from the biblical revelations about the Great Commission.

Prayerfully, the research and discussions in this book will inspire, convict, and awaken slumbering souls who greatly desire to serve God according to His manifested will. There are still many genuine Disciples of Jesus who desire to understand with spiritual clarity about how to approach evangelism and missions as Jesus would have us. May the Lord guide you to find His will within the divine calling over your life.

S. E. Ray is founder and director of Messiah Missions, an organization founded on the principle that evangelism is the essential purpose of the Church, along with assisting the destitute both locally and internationally. Ordained in 1989, he has served in various capacities in the Church and provides leadership for numerous Asian church plants.

A well written article to consider: “Why Most Mission Trips are a Waste of Time” : http://www.csm.org/articlewhymost.php

Also, church planter Jeff Vanderstelt addresses the modern church fad of “Mission Vacations.” He implored people to “stop just running and going.”:  Missional Is to Go, Incarnational Is to Stay