Greetings to you in our Master’s name who said, “I have revealed Your Name to them” (John 17:25 and 26). Since our Lord believed us He has revealed the name of the Father to us, so we have the access of calling Him Abba Father. Praise oh ye our father! This mail I draft you to tell regarding the compassionate love of God. Friday last I got pneumonia fever due to some ill climate here. I was admitted in Vatsalya health care clinic in Mysore city. Pastors and evangelists turned up and prayed over me. The Doctors discharged me and sent back to house and I am keeping good health presently.

Sister Thankamma and John Mohan were sharing gospel with some village folk. Actually they have come for the Nanjangud nieces wedding. Gospel can be shared at any time. Who knows what happens to the Christ less souls in this dangerous world. Two women accepted Christ this day. Marriage was arranged by Nanjunda’s sister. Please pray for the blessed Christian life. In this time sister Thankamma could answer all the questions of the village women.

Pastor John Mohan distributed also the Kannada version of the book Finding The Balance In World Missions. Many pastors, evangelists and gospel workers had come to the meeting. We thought to give away the book to the right candidates even if there is no money in their hands. Our main aim is Christian workers should be benefited and a Holy Ghost Revival should come to India which can sweep the corruptive, adulterous, idol worship nation unto God ward. Because of the Millennium old witchcrafts and black magic practices, the eyes of the seeker are blinded and could not open to the Gospel of the glorious Son of God.

However we do not give to the books to the unbeliever because they do not even grab the idea of the text. The unbelievers are given a booklet called Secrets of Real Life which has a salvation message and a form to fulfil as the first time decision maker and it is used for prayer request filling also. It is handy and has 30 pages. Its contents include loving Father and Jesus Christ, miracles of Jesus and in the end a form for filling after first time decision. We have been giving this tract in Chamaraja Nagar, Haradanalli also except Nanjangud Town and Mysore. Some people ask us to pray over the phone also. They are compassionately prayed over and the counselling needed is shared as a ministry. 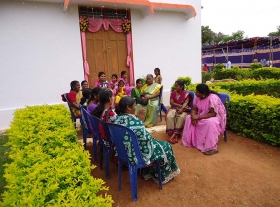 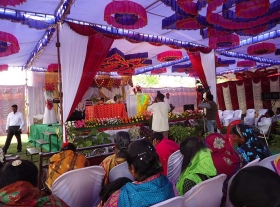 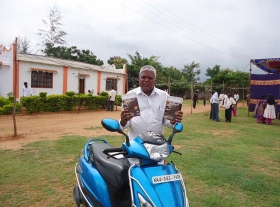 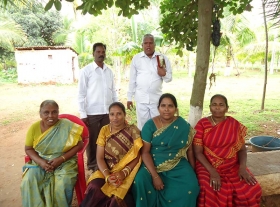 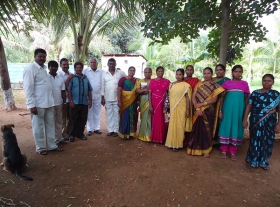 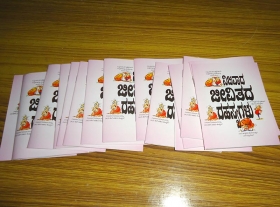 Though we cannot support them regularly and functionally at present since they are saved through our ministries they have a good fellowship with is. Debur, Belale, Gandigram Linganalli, Ningalli Sirumalli, Hegdehalli are some of the surrounding villages where we visit and impart the imperative Gospel message which is the only answer to all the problems of the mankind at present. Brother Ravi and his wife, Shanmugham and his wife, Joshua, Gracy Lydia are improving in their Christian testimony.

At MESSIAH MISSIONS, we strive for the steadfast faith in Christ rather than attending Sunday services. A scenic atmosphere in the Mamre Garden is the additional encouragement for the believers to gather together. Since lunch is provided people need not worry about the midday meal. Since Brother John Roy takes time to drop the last believer to the village’s conveyance problem also weakens. Brother Samuel Nanjunda which started this ministry is presently in Mysore city and he is blessed with a baby son, who is growing in grace and health. As a future plan we want to start feeding in Belale village which is very remote and a number of children are there. In Debur a good Sunday school is running and in Gandhigram many women eagerly listen to the gospel. However in Belale, there are only 4 believers and two of them are yet to be baptized.

John Roy captured baptism pictures of new converts through Messiah Missions Ministry in Mysore City. Many people came to Christ in Mysore town last week the meeting was conducted to share the gospel to village people. 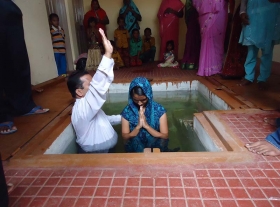 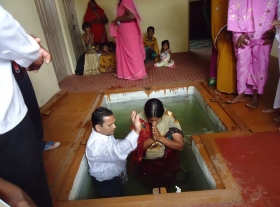 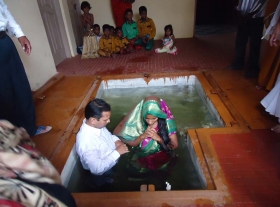 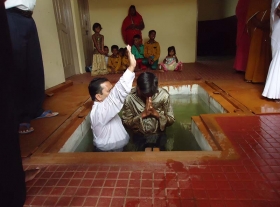 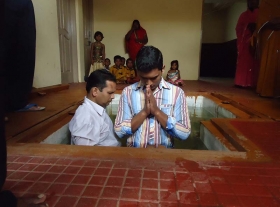 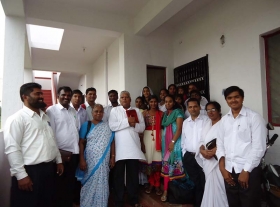 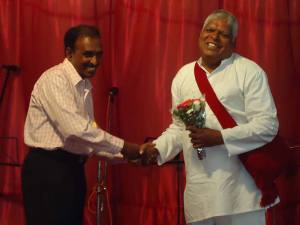 He has been associating with us for the past 4 years. He is married and has 2 grown up children. His father Papanna was a good friend of mine and went to be with the Lord. But Prasad is continuing the ministry. His main activity is fasting prayer conducting for co evangelists. Because of the fasting prayers many people have been saved and came to the Lord.

Mysore Christians selected brother Prasad to extend Boquet to Pastor John Mohan for the acceptance of the 28 years enduring ministry in Karnataka State right from North Dharwad district, Uttara Kannada District, Chickamagalur District, Bangalore Rural District, Chickaballapur District, Mysore District and Chamaraja nagar District, 28 long years completed in Karnataka on the 26th of June 2014.  Since I started ministry right in 1975 June, 39 years in ministry is completed in July last. Many times I have experienced alone with Jesus incidents. But comparing to Adoniram Judson’s’ experiences, our hardships are nothing comparatively. 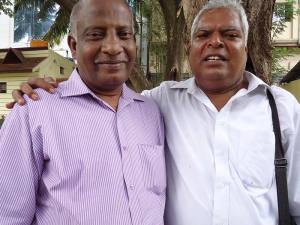 I met Pastor Mohan after 34 years. I am M. Selvaraju BSC BED I was working in Nagaland as a teacher missionary. That time we needed a Bible college lecturer in 1980. I came to Coimbatore the industrial town and there was a bible College. I asked for the first rank student and within days we reached Nagaland I left the evangelist there and came back to Tamil Nadu.

Now I see my friend which has not taken back from the calling the Lord has given him. Presently I am working for the State Bank of India as city manager in Mysore. I commend Brother John Mohan and Messiah Missions. 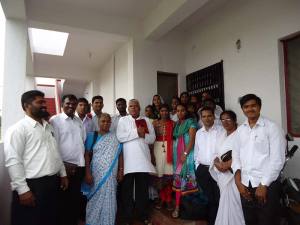 I was born in a Hindu, Nair Family. Nair Tribe Is The dominating tribe in Kerala State and mainly engaged in witch craft idol worship black magic, rowdism and adultery. My father was a drunkard and he was destroying ancestor’s properties. I quickly understood there is a curse in the family. Later after attending a Christian meeting I could understand that this was an adamic curse all men have sinned against God and their destiny is eternal hell the wages of sin is death and the gift of god is eternal life in Jesus Christ the only son of God.

I received Jesus Christ as my personal Savior and lord of Lord of Life. I married a Christian girl. We have three female children. I know Pastor John Mohan for the past 20 years. Since we are from the same Nair Tribe he put special care in bringing me up. He helped me to join the Asian Christian Academy in 1997. I was graduated from there and went to Davangere in 2009 again to develop my work. After the Messiah Missions began to support regularly every month he asked me to come nearby last year and helped me to take a house for rent and helped in my daughters college studies also.

Because of that he used to suffer some times. But he began to tell I am his younger brother in Christ and it is his duty to do so. Last month some 10 people wanted baptism and he and I taught them to keep steadfast faith in Jesus Christ after baptism and they all witnessed the lord and Friday we had baptismal service.

—-
Please continue to pray for us and the new converts. I once again take this opportunity thank you very much for conferring on me the honorary degree of doctor of ministry.

I covet more your prayers, love to all and may peace and grace continue.