Greetings in our Lord Jesus Christ!

Messiah Missions gospel evangelical ministry continues throughout the day. We visit the houses, giving the tracts containing salvation messages and pray for the sick. We also give New Testaments and Holy Bibles to interested candidates which will read the portions of the Bible. We never give Holy Bibles to new contacts. We give only New Testaments to them, but if some people are continually coming to church for Sunday worship, fasting prayer and Bible study we use to give them Holy Bibles because they used to hear from the portions of the Old Testament also. Today we met Saji and Sabu both are Catholics but heard the gospel with open hearts and ears, and asked for prayer because he had continue cough. We met Suniland Gopi also which are tribal and came for agricultural labor work in this area. We went to Madapura which is 21 kilometers away from Nanjangud Town and gave Holy Bible And Anew Testament to Shilpa daughter of Rukmini an old contact here and which is coming for church these days. 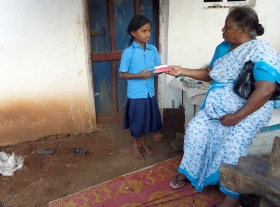 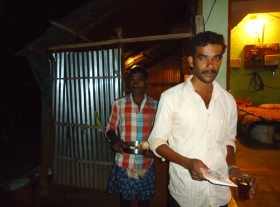 As I have mentioned earlier last month pastor Thampi had been admitted to hospital because he was attacked by communal elements and beaten on the chest. His chest was bruised and pus formed there. He was taken to Calicut Medical College Hospital and had been undergone surgery. We ask for prayer continually. This village full of Hindus and some people threatened us not to come here and change religion. We never feared for the LORD will be with us when we do gospel work.
Now that he came back to house in Sultan Battery, I could meet and help him for this month. He does not have space for conducting Sunday worship. Some Pastors were helping to swell the congregation so that they can support by themselves but for the case of Pastor Thampy he needs us to support him every month. I am paying him 2000/- rupees every month and it is a great help for him. 1500/- rupees go to his house rent and the rest is a subsidy for the survival. We thank the donors of Messiah Missions for helping us to support poor evangelist’s widows and children ministry also. 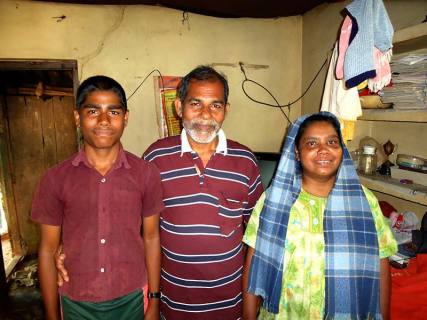 By the grace of God the central church is growing and some women are ready for baptism. This month already we have given hundreds of salvations tracts and scores of New Testaments and Holy Bibles. In Mysore church 10 persons have taken baptism and Chethalayam church 4 people took baptism. Nanjangud church has 100 believers and many times we conduct worships in Nanjangud Town, Nagarle, Thoravalli and Anjipura.
Recently, we painted the front portion of the central church building wall and also the door. We thank the partners and donors of Messiah Missions for the continual support to the Nanjangud works. Not only for the evangelization of the area but also children work, widows support, tailoring school support, petrol subsidy etc. May the good Lord Jesus Christ bless them abundantly and reward them a hundred fold as they are not supporting a church or a mission but saturation of the gospel in a subcontinent where 1000 million lost souls are there. We at Messiah Missions work among the least and the lost.

September 10 is celebrated as Mysore World Missions Day. The meeting was started at 4 pm and Pastor John Madhan Mohan welcomed the pastors and evangelists for the meeting and opened the discussions on the world mission’s innovations in the native evangelization breakthrough. We invited some pastors and evangelists for the meeting. We two pastors John Mohan and A.V. Raveendran decided to do it simple and share the expenses. 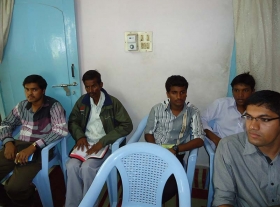 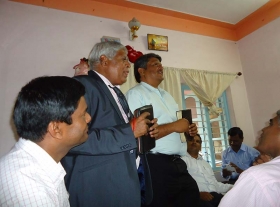 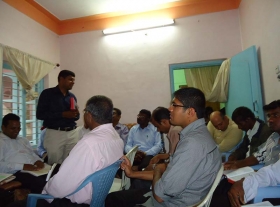 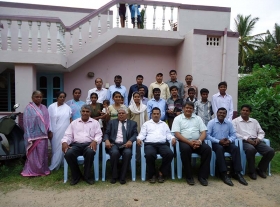 Of course, many pastors are finding it great difficult to afford the travel costs to reach the villages. We cannot provide them any two wheeler or bicycle right now. But at least once monthly, we want to bring them together, to renew their vision and zeal. To help them make sure of their calling and being chosen to be lights in this end time and dark age.

The attendees included 22 pastors, evangelists and sisters in Christ (I have attached list with names). We had nice time prayer and the word of god regarding World Missions and Native Church and Workers. Brother Joel as the president of the Mysore District Pastors Fellowship told we should love Jesus and his great commission more than anything else and continue in witnessing Jesus Christ to the world because this is the end times concerning the world.

Pastor John Madan Mohan led the meeting from beginning to the end but gave time to all the pastors and evangelists to express their view. Many of the pastors had received their copies of the Finding the Balance in World Missions book in English and Kannada Language but the new comers were given copies of the Kannada Edition free of cost because this day is the world missions day. The meeting came to an end after the prayer by Pastor Sajan Kuriakose.

A new children work was established among the slum children in Ragavendra Nagar. Some 15 children gather together to learn the verses from Bible and short stories, songs also. They straightly come there from school dressed nice and after Sunday School children ministry, they go to their respective homes. Sangeetha Shyamala, Cousalya, Bhavana, are the main girls which eagerly follow instructions and obedient students. Our children works specialty is they will get snacks, they will be helped to play in the evening, it is seen that they get marks in the tests in the respective classes. If they are ill they are attended by our evangelists and taken to hospital and it is seen that their health is restored. They are taught to pray and memorize verses. Because of the children work many families have come to Christ. 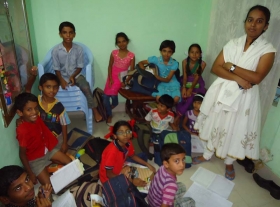 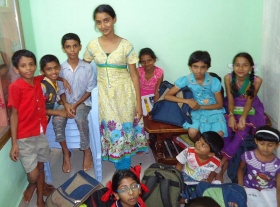 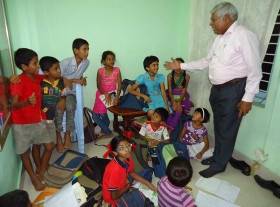 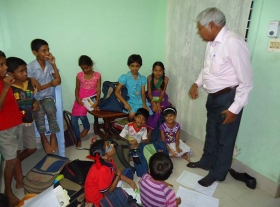 Sakkamma Is Happy After The Illness

Sakami is regularly supported by Messiah Missions. Her husband was killed by unknown persons. He had an affair, an illicit relationship with someone in another village. After Sakkamma lost her husband she was critically desperate and came to the Lord Jesus Christ and took water baptism and stands fast in the faith. She has five female children and frequently travels between Mysore and Bangalore to maintain balance among her daughters. No sons. She was ill due to stomach pain. Doctors told she must undergo a major operation to remove uterus. But due to prayer and faith she got healed after two days and she is happy in the Lord. Whenever time permits she witnesses to the people and her standing testimony attracts many for the faith. 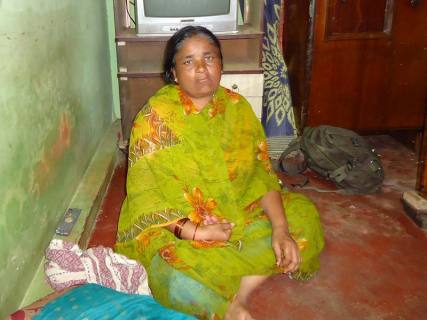