Greetings to you in our Lord Jesus name!

I have sent some reports and pictures yesterday. Following is some information from an agreement I made with Mrs. Hephziba and the other staff members of Messiah Missions Tailoring Institute. The high rate of female suicide, dowry deaths and unemployed female output made us to think about something we can do for the women folk here. We used to have a tailoring school in Kerala before coming over to Karnataka, answering the call of the Lord for Karnataka. So we thought of starting a free Tailoring Institute which will benefit our believer girls and which will be useful for the saturation of evangelism in these villages. We had three tailoring machines already. We shared it with our International Director Rev. Steven E. Ray and Mrs. Johanna Ray. They were very much supporting and encouraging since they were very much burdened about the womenfolk and especially regarding the young girls they readily agreed for us to start the Institute. Rev. Dr. Steven E. Ray went one step forward by buying us a Usha Janome all fashion maker and designer machine which will be very useful for zigzagging and doing overlock. Rather it will help for the participants to be trained in the sofisticated machines as well.

The Institute is a registered Association running and as well as a unit of the Messiah Missions International. The Institute has the power to impart skills to the participants and give Certificates to the successful candidates. Many newcomers want to come from nearby villages. The Institute wants to give free training. Apart from that, it will give bus fare, travelling expense and even midday meals to needy candidates because the main aim of the institution is more people should be benefited. In the end of the training, it is expected that we may give away a Tailor Model Sewing Machine to each of the participants by finding out suitable persons as Sponsors. A Tailor Model Sewing Machine costs 110 US Dollars at present. But by this time even the Institute needs two Tailor Model Tailoring Machines and a High speed Tailoring Machine which will be useful for Training to stitch Jeans.

As today we had function for the new participants, a Sign Board was presented as a donation from our Evangelism Director Paul V. Murugesh. He is the person bringing up some local supports though meager amounts. But local participation is appreciated for all the missionary efforts, though small or big because it boosts sustainable development. Brother Basavaraju Andrews, our Secretary, opened the sign board. We can see the picture of the signboard in one of the pictures shown below. Mrs. Hephzibah Radeesh, which is in charge of the Women and children Ministries of Messiah Missions Ministries in India welcomed the gathering. She is the supervisor for the Institute at present. Pastor John Madhan Mohan prayed and dedicated the Institute in the name of the Father and the Son and the Holy Spirit, for the Glory of God and of Jesus Christ.

It is decided that daily one hour prayer and some hours of training will be conducted in the Center. All the participants are very happy because the training is free, and because of the friendly atmosphere, and also of the spiritual circumstances. 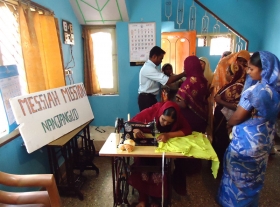 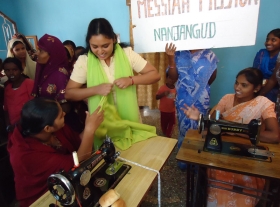 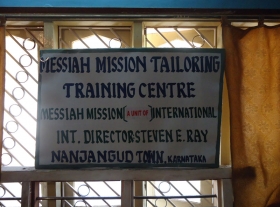 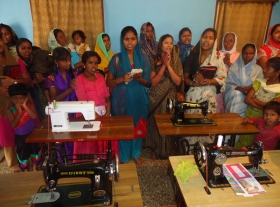 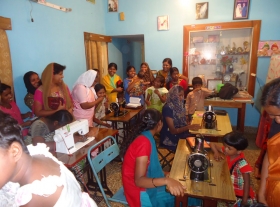 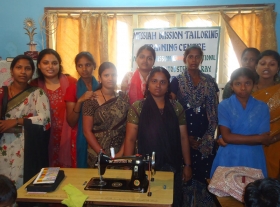 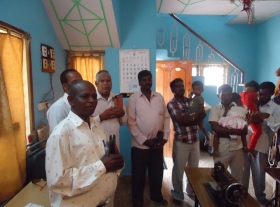 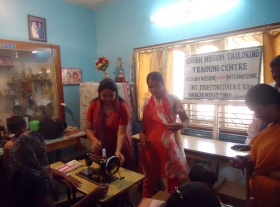 By the grace of God and since the believer sisters requested we have to formally inaugurate the Tailoring School.  Pastor Suresh Chethalayam came to Nanjangud town all the way from Sultan battery to inaugurate the Tailoring School. We have 4 tailoring machines, including the high speed USHA machine donated by Messiah Missions International. Presently more than 20 participants are on the rolls of the Institute. Pastor Suresh prayed that we will have 10 machines and more students.

A prayer hall named Word of Victory Church was attacked and the Pastor and other 20 people were beaten black and blue yesterday in Karnataka. It is said to be Bajrang dal activists who did this crime. Bajrangdal is the militant wing of Barathiya Janatha Party which is the ruling party in Karnataka. So we are coveting much prayer of the people of God because wherever there were persecutions the christian Church has grown. Blood of the Martyrs is the seed of the Christian church.
Wherever the government has supported the church therevere we have seen the church has become worldly and its lukewarmness has caused much saints’ backsliding.

After starting Messiah Mission in India, the headquarters were in rented building. Because of the grace of God and as the need pressed us forward the international governing body headed by the Rev. Dr. Steven E. Ray decided to start the construction of the work for a permanent building by faith as the provisions support. After starting the work we have not needed to stop the construction of the building as the Lord has been generous to donate us liberally for the building works. Presently the state law stops us to continue a shelter for orphan and destitute children in a rented building. So after completing the building we are able to shelter the orphans and the destitute and also the older widows there.

Present works on the building include meshing the balcony, constructing a open room for putting water tank on the top, railing the staircase and sit-out in the upstairs. Fixtures for the electricity wires and drainage system is completed and we have to buy wood and timber as well as granite stones which will need a large amount imminently. 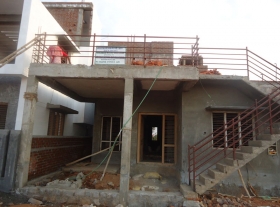 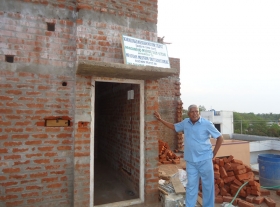 WIDOWS CARE AND OTHER SUPPORT DELIVERED

Presently, we care for four widows named Mrs. Sakkamma, Meenakshi, Manjula Krishna (deserted) and the black Kurimari Kamalamma, in Nanjangud, and six others in Wayanadu Tribal areas.  In those I have sent pictures of Mrs. Geetha and some others earlier.  There is an idea of providing rice and groceries in stead of money for the cared widows. But encouragingly they are fastly improving in their faith and fasting and prayer.

The Sunday Schools in Ashokapuram, and Rajaji Colony/Nagar are the two which show much improvement as from their parents are attracted and come to the Church services. These Sunday Schools are not only conducted on Sundays but also some other week days too.  Miss. Ambika, Miss. Rajeshwary, Miss. Gowramma, Miss. Anuradha, Ms. Rekha Ravi , Mr. Mahadeva, Mr. Raju are the seven teachers which help me in this ministry. We provide the students with books and notebooks for studies, shuttle cocks and rockets to play and the New Testament to read.  Sunday afternoon, I visited the Gideon Representative here and she has promised to provide some New Testaments in the near future.  Mrs. Hephzibah is in charge of our Messiah Missions Sunday Schools and children works.

One day it happened that I attended a church service by a an evangelistic group as my friend compelled me to go with him.  He gave me a Holy Bible also.  I read the Bible and understood there is a God – the real God who did not come with weapons and threatening.  He is a good shepherd and gives his life to seek and find the sinner and help him to get eternal life. I had seen many christians but all of them are nominal christians and they were attached to the church for only to be christened, married and buried. 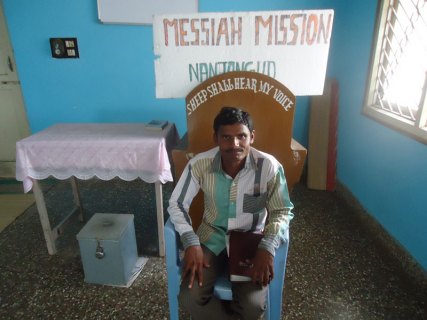 I believed in Jesus and wanted to live a life that is acceptable for god. In the mean time I was married but no issue. My pastor gave me baptism and began to do the ministry as the Bible tells to be witnesses [Act 1:8]. My wife did not like it and went away to her mother’s huse forsaking me.

So I came to Nanjangud town from Mysore city and continued with Pastor John Madhan Mohan in the Messiah Misions church and now continue in Ministry.  Presently I am living with Pastor John Madhan Mohan.  I need a house to live separately and I need your prayers to fulfill the will of God in my life. If the Lord wants me to live alone I will continue as Paul the Apostle. Or else I will pray for my wife’s home coming. I do not believe in Divorce.

May grace and peace multiply unto you in the name of the Father, Son and the Holy Ghost.