Dearly beloved in Christ,
Greetings in the matchless name of Jesus, our Saviour and Lord!

Everything in this world has limitations, but love never fadeth away. When King David sang, “Bless the Lord OH my soul, Forget not all His benefits, (Psalms 103: 2) he was calculating the goodness and mercy he had enjoyed from His loving Lord and Saviour. (When I used to mention Messiah, it is Jesus all including Lord, Saviour, King and Elshaddai provider.)

We are doing well and happily continuing evangelism activities. We thank the Director and donors for the able leadership, successful motivation and sacrificial donations extended by which we could come this far. Our Evangelists start early in the morning every day to villages with a distance of 6 kilo meters to 20 kilometers, distribute salvation tracts and pray for the sick people which is represented by pictures here.

We not only preach to big crowds, nevertheless preach to two or three people if gathered before us. And they are saved and accept Jesus Christ as Lord and Savior. Many first time decisions are we getting every day. We are delivering New Testaments to all the persons if they are literate, New Testaments for further reading. One thousand and four hundred salvation tracts had been given away this month. Somebody offered me another four thousand salvation tracts for our distribution. I met him during my routine gospel work in Begur, which is 22 kilometers south of Nanjangud town.

In the hospital visiting, one drunkard disturbed us and tried to stop us from praying for the sick people in the Government Hospital there. He went and complained to the duty Doctor against us. The duty doctor called us and showed the door, but all the other inmates singled him out and he went out of the Hospital absconding. We could continue hospital visiting and praying for the sick people. The doctor thought if sick people are healed by prayer, the credit will not come to the medicine and the practice. But all the glory to God Almighty because not by medicine nor by injection but by the power of the Slain Lamb comes healing, because he has carried away our sicknesses and surely born our pains and because of His stripes we are healed. 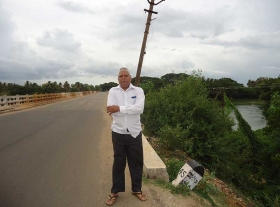 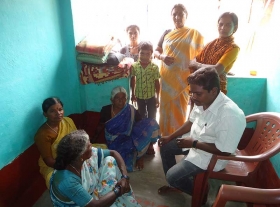 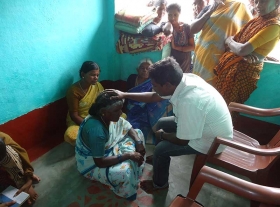 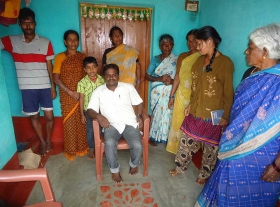 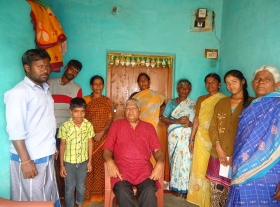 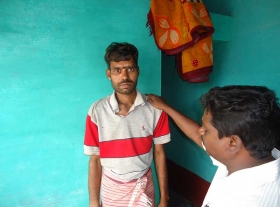 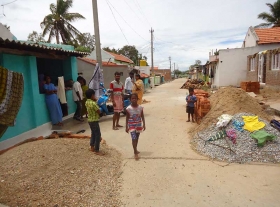 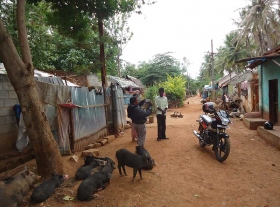 Our Missionaries visited Rampura village which is situated 18 kilometers from our Headquarters and lay on the banks of the River Kabini joint river of Kavery the famous legend in South India. There are a thousand houses here and all the houses belonged to the scheduled caste families. It seems no body has yet visited this village with gospel. Children and adult both witnessed that they are hearing the gospel for the first time. Ttwo families came to Christ and dedicated their lives to follow the tributes of the Word of God. Please continued to pray that These people will stand fast to obey the commandments of God.

One small house is being built for the three widows attached to our work. They are Rajamma, Madamma and Gowramma . since they come out of very primitive condition they find it difficult to co-operate with others and vice-versa. Ten bags of cement were donated by Venkatesh, eight thousand odd bricks and other accessories were donated by Somanna, a distant relative of one of the women (widow).

Local participation encourages the native evangelistic missionary works as our Director writes in his book, Finding the Balance in World Missions, “We do not ignore those outside of the Church, but we give priority to the needs of those in the family of God, as order of first importance… We need to take a look at the collective action by a local church, after the New covenant came into action starting with the Book of Acts. In Acts 2:44-45 and again in 4:32-35 we note that during a time of great need it was believers who had all things common and were distributing to each as anyone had need.”

Through press reports you must have known that radical terrorism has been spreading in India very rapidly the Real peace of Jesus Christ has to be saturated in these days and your support for this cause is vey much essential. It was in 2008, that a number of Christian Churches were attacked, prayer halls vandalized and innocent believers beaten black and blue and their houses ransacked. But at present people outside think that everything is decent here. But Christians in India are always counted as outsiders. New converts are denied even drinking water from the common water facilities. Their ration is denied, their functions boycotted. Their petitions unregistered. Their vehicles snatched for undue reasons. All the Government system function as if it works for all but minus Christians. No Government emoluments reach Christians. No concessions touch them. Added to the fire and shown to the mirror is this incident that the right wing agitators cry for the blood of the lone Christian Minister. Interestingly this is not the first time that the agitators took to the streets for this same demand in the past three years. Almost seven or eight times this kind of agitation has taken place. A former minister was shown the door when he used the words, “God will judge.” In the Union Cabinet the number of Christian ministers is nill. In Karnataka State the number of Christian minister is one and the Right Wing organizations collect their rank and file to oppose him with nail and teeth. World Christians should unite for praying for the safety of Indian Christians. In the pictures below you can see the right wing agitators crying for the blood of a minister because he is a Christian. Anti-Christian slogans are shouted and his effigy is burnt and agitators block the streets causing lot of unnecessary inconvenience to the common public.

Testimony of Umesh: I am Umesh. I am 22 years old. I live in a village called Zeemalli which is 23 kilometers from Nanjangud town. I am a fits patient. When attacked with epilepsy I used to fall down. Many small wounds on my leg show that. I went to all the hospitals in Nanjangud and Mysore city. But of no use. I am from a poor family, my father could not afford me take to Bangalore or any other big town hospitals. I thought only God can help me. In the mean time a Pastor and a young man came to my village. They preached about a new God called Jesus. I have not head a name Jesus, previously. This god is a good God. He does not have an axe or a knife in his hand neither a snake to frighten the devotees. He stretches his hand and calls us to repent and be healed. I believed in him and asked these people to pray over me. I have good peace now. Not only if I am healed, whether death or life, I want to follow this God. I want God’s people in the United States to pray for me and also support this ministry.

May Grace and Peace follow you,
The Lord knows the way of the Righteous (Psalms 1:6)