Blessed be the Lord God of our Forefathers who blessed us with all the richest blessings of the Heavenly Places!  By the grace of God we are in good health and the works in these region are going on smoothly.

[In April’s update, it was reported that the home of Manasapriya, one of the girls served by Messiah Missions India, had suffered the total destruction of the roof due to an earthquake over the region she lives in.  Below are two photos depicting the home before repair.] 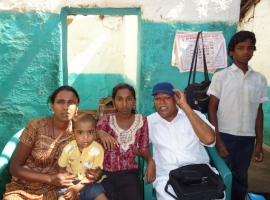 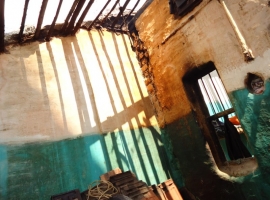 Manasapriya is the eldest daughter to Rekha Kamal. She has two other siblings also. When Rekhas husband was addicted to alcoholism there began trouble in the family. Rekha and her children were deserted and were suffering without food for days and nights.

In the meantime, MESSIAH MISSIONS began a ministry in this village. Manasapriya was so excited to hear the Love of God in Christ. She began to read the bible and learnt action songs. Actually sister Thankamma Mohan worked hard in the village to teach them verses and songs.

Later Manasapriya’s case came to the notice of our International Director Rev. Dr. Steven E. Ray. Manasapriya is the one among the three female children directly cared for and sponsored by the Director.

Because of Manasapriya’s interest, she brought her mother also to the prayer meetings. After coming over here and atending Rekha got a new hope in Life. Everythig is not finished, something will come new on her way. We supported her to write the failed examination in Intermediate and she joined for Diploma in Education a Teachers training course. As she was from a scheduled caste origen, the local authorities also came forward to help her granting aschlorship.

As she finished her Diploma in Education she got job in Christ’s School [a Christian school under Catholic management]. The priest gave her a job because she professed to be a believer.

On April 11 and 13, we had heavy rains and minor earthquake here. Many houses lost their roofs, and asbesto sheets which covered the roofs flew away. Rekha also lost her roof. We went and comforted her and prayed for her.

Pastor John Mohan met Mrs. Kamalamma which is the Leader of the area and also a relative of Rekha and we discussed the matter in group.

It was decided to put Mangalore tiles since some more money is needed for buying cement, sand [now a days very costly. Rs. 7000/- for a tractor load.] Cement is 360 /- INR per 50 kilo gram sack. And two doors and frames which costed 3000 INR per door and frame.

The work was done in a phase by phase manner. First the roof was restored immediately because it is rainy season and there is not other shelter to give them for temporary living. Next the front portion was cemented. Next the toilet was cemented and the two door frames are fixed and the walls are carved and cemented.

Manasapriya and her family are now safe and they live in a secure house. Housing in this area is very problematic; to put this family outside somewhere up till the housing works completed. Big amount they ask for the monthly rent also. Anyhow Manasapriya is happy now. She had passed to the higher standard in her school. She is fastly learning ENGLISH AND MATHEMATICS now a days as she is aiming bigger aspects in her life for the future. By the by she is improving in health and complexion. God bless her and the other siblings. 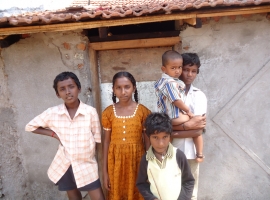 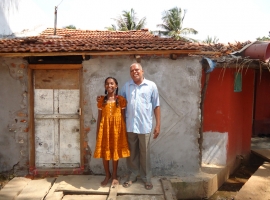 We had some rainfall for the last month and it is raining too for some areas of south India .

My wife Thankamma stands with me to hug and shower kisses on Mrs. Ray.

I also send my greetings and stop here.

Yours in our MESSIAH’S MISSION,