This is a detailed report prepared by Brother John Mohan for the work carried out during the month of October in the Mysore Disctrict.

Saturday, October 1:
A day with brother Samuel Shivakumar which is working in HANDUVANAHALLI. Visiting and working among the Hindu people here and in the evening conducting gospel meeting in Brother reguvel’s house. This brother’s house is called Mamre. This is a three acre campus; good for camp meetings. Sis. Carol Wilson also came and visited this place. A cobler named Ganesha is saved from this village and he lives here with his wife and son John and daughter salomi. Another family that came to Christ here is Mr. Mathews Palani. Reguel has three sons and three daughters. All of his daughters got married to believer boys three, two and one children respectively.

Sunday, October 2:
Worship service in Nanjangud town church; Conducting Sunday school which has a strength of 35 children .
Helped by Brother John Roy B Sc. Individual prayers to the needy souls.

October 3:
Work in Ashokapuram village. In the fore noon working among the slum heathen people which worship Idols and Elephant Gods.
In the evening working with the Messiah ‘s Children club which is headed by Sister Hema Basavaraju which has 50 children and in the night Conducting cottage prayer meeting in Caleb Ramanna’s house. Assisted by Mrs. Thangamma John Mohan.

October 4:
Going to Rajaji Colony. This slum area is full of drunkards and idol worshipers. Serving the Elephant God, Cow God and Bullock God. People are dark colored. Visiting some houses who are willing to hear gospel. After noon working with the Messiah Children Club headed by Miss. Ambika Paul which has a strength of 40 children. Telling stories and praying for the needy children and their parents. Mr. Marappan and Mrs. Manjula Marappan has been recently repented and turned to the Lord from this slum area. These area people have built a temple for their monkey God but during festival the priest bites and cuts the throat of a swine and drinks the blood. The meat is shared among the villagers and there will be eating and drinking for two days. At night there was a cottage prayer meeting in Mr. Murugesh Paul’s house. Murugesh Paul’s on actually had an accident when he slipped down and broke his right shoulder blade six months back. Presently he is quite healthy and a good witness for the Lord among the young people.

Wednesday, October 5:
Going to Sri Ramapuram village. Working among the slum people here. Jesus has healed a 10 month old male boy from illness and he again had an accident when he pulled a pot of boiling curry 20 days back. Presently the boy is in good health amazingly the father of the child Mr. Yaseen has been saved from a Muslim family but has very good faith in the Lord. When the accident occured to the child first he did was to catch an Auto Rickshaw and come to the Messiah Bhavan for being the child prayed for as in the verses of the James 5: 13 – 16 And the fervent prayer of a righteous person heals the sick.

Meeting with Manasapriya, Kavitha and Visalakshi [I have reported a distant uncle wanted to marry her but she is a minor girl and the marriage is still in discussion level]. I am sure Visalakshi will stand fast in the faith and will only marry after a couple of years when she will be a major and able to lead a life of her own. Manasapriya is presently improving in her studies as she aims to come up a lot in her life. She was poor in English language and Math Subject. But she could come up a lot after some more attention was given to her. She sends her greetings and a lot of hugs and kisses to her uncle Rev. Dr. Steven Ray and Aunt Jo. This days work found its fullness with the cottage prayer meeting in Yaseen’s house.

October 6:
Tursday going to Shanker pura which is another village in the vicinity and full of heathen houses and slums with full of people worshiping the Monkey god. Brother Vishakanta and family recently gave their hearts to Jesus and repented, he is selling petal leaves in the vegetable market and he was a alcoholic . But presently he left selling the cancer making petal leaves and he is interested in studying the Word of God and should be trained in the Evangelistic Ministry. He had already brought his two younger brothers and their families to the prayer meetings. Miss Mary Gowry is looking after the Messiah Childre Development Ministry club here. She has a bachelors in Political Science but wants to continue in different kinds of ministry levels. I have already written to you about how she prayed and she grew four inches though she was dwarf. Now no body criticizes she is a dwarf. In this club, girls outnumber boys and all the girls are seeming potential. A girl Kumari has her lip split. I have prayed for over her and I expect a good result . If some camps are conducted for operating such lips I will take her and see that her lip is operated. I was very happy to hear these girls singing.

October 7:
Friday is spent for fasting and prayer since without fasting and prayer we can not stand fast in this heathen area where the gates of hell is height and the witchcraft and black magics are performed against the ministry.

October 8th:
This day is dedicated to encourage co-workers; to spend time with devotion of the word of God. And doing necessary things for the following days prayer and church worship.

Sunday, October 9th:
Today we start the early morning with the local Sunday school and worship service . Many people turn up for prayer and worshiping the Lord Jesus Christ in spirit and Truth. 3- 5 songs are sang as a congregation and the Reading of the Psalms follows.
Some people witness publicly as they have received miracles from the Lord. A sermon is given for the encouraging of the children of God as the Lord has given a lot of Promises to the believer.
In the evening again another worship service in Mysore town where there are a lot of believers come for worship from Non-hindu back ground.
In the near future I will have to entrust this Nanjangud worship to Brother John Roy, or Brother Shivakumar Samuel or Brother Shyam Samuel or some other brothers and take more responsibility in Mysore town worship. 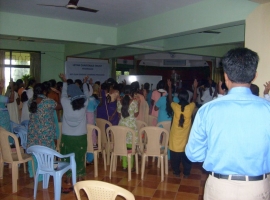 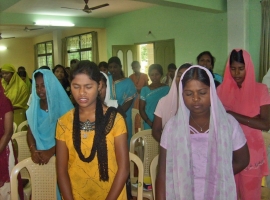 Monday, October 10th:
Fifth mile Slum Ministry. This day has been dedicated to the Fifth mile slums as Miss, Rajarajeshwary is looking after a children ministry here. The children are more pious and God loving here and have been always happy to come and encourage this ministry. Singing children songs and teaching Bible Truths through song and Stories. Even time is alloted to the Secular studies and their progress is appreciated. A sound mind in a sound body is better so we appreciate the children to have some play time in the evening and we have even provided some play materials like Tennicoid rind, Shuttle cocks, Discuss-throw [plastic item]. We do not provide Cricket bats and balls because we have little time for pacifying quarrel with neighbors. This evening found us cottage prayer meeting in Ashamahadevas house.

Tuesday, October 11th:
Channadayapura village is situated 30 kilometers from here. There come 50 children for the evening club of the children. These children are from very poor back ground and scheduled caste origin. We have distributed 70 gift boxes here which was given by brother Jose Kalpatta. He told those boxes he got from the Samaritan Purse. But I could not get them while contacted. Any how it made a thrust among the parents to send the children to the MESSIAH CHILDREN DEVELOPMENT CENTER and Miss Shruti is looking after the work receiving a little remuneration from us. Singing and learning verses from the Bible are these children’s interesting things.This evening found us in Rajan brother ‘s house praying together for the Revival in India.

A little persecution is experienced in DEVARAMANAHALLI village as the communal Hindu fanatics made a false propaganda that the Evangelists come here for kidnapping children and they will take away the eyes and kidneys of the children and throw away in the jungles. But they did not lodge a complaint against us in the local police station because everybody knows the good works MESSIAH MISSION MINISTRIES is doing in this part of karnataka for the past months. One caste called the Lingayathus train their guns against the gospel workers but the last time I was beaten was on 7-7-2007.

Recently in India Rev. William Lee and Rev. Blessings the missionaries were arrested because of false complaints and were deported. Let us pray that these kind of harassment would staff and a comfortable atmosphere would prevail in India for the Evangelism and Revival of this continent. In Pakistan the minority religion people are given a representation but in Karnataka no Christian Minister had been sworn in during the past 5 years.

We want to humble before the Lord as the Lord sees us significant in His sight. The certificates were framed and Rev. Raveendran was conferred the Doctorate Degree on him on Last Sunday. He left for his mission field in the Bellary district [Davangere near] where we taught eight youngsters Bible Training last year. I had earlier send those reports so I do not add here fearing for repetition.

With much love and regards,
Yours faithfully in our Masters Vineyard,