BROTHER VASU IS HAPPY IN JESUS

Vasu began to come for the prayer meetings in November 2010. But his wife was against changing religions. Vasu told thed important thing is not changing religion, but knowing true god and to know the true way of salvation. Then his wifwe also turned up. They have two children.

But never did his wife allow him to sit or kneel in the prayer service. She used to make a lot of problems. In the end, it came to pass that she had three demons inside her and in a prayer meeting they announced their names and went away.

The next thing was to find a way of living. He was stealing firewood from reserved forests, he was cutting Teak wood from Government plantations, and he was selling Arrack tro find a living. After his conversion he wanted to leave them all and live like a disciple of Christ. Messiah Missions had to support some amount because he is from the tribal background and he came to the Lord through us.

He learnt Hair cutting, shaving and Hair dyeing and started a saloon here. 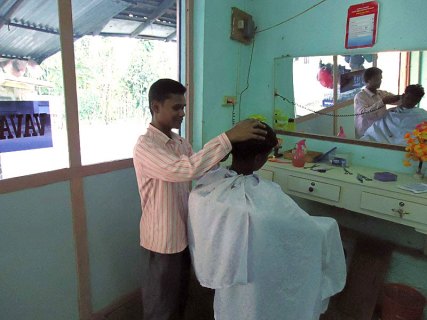 When Pastor John Mohan met him again recently, he is ever more happier than before. His wife is also continuing in good faith.

This is a clear evidence of how MESSIAH MISSION changing lives in the remote areas of India./KARNATAKA.